Egypt’s Shoukry is optimistic about delegates reaching an agreement 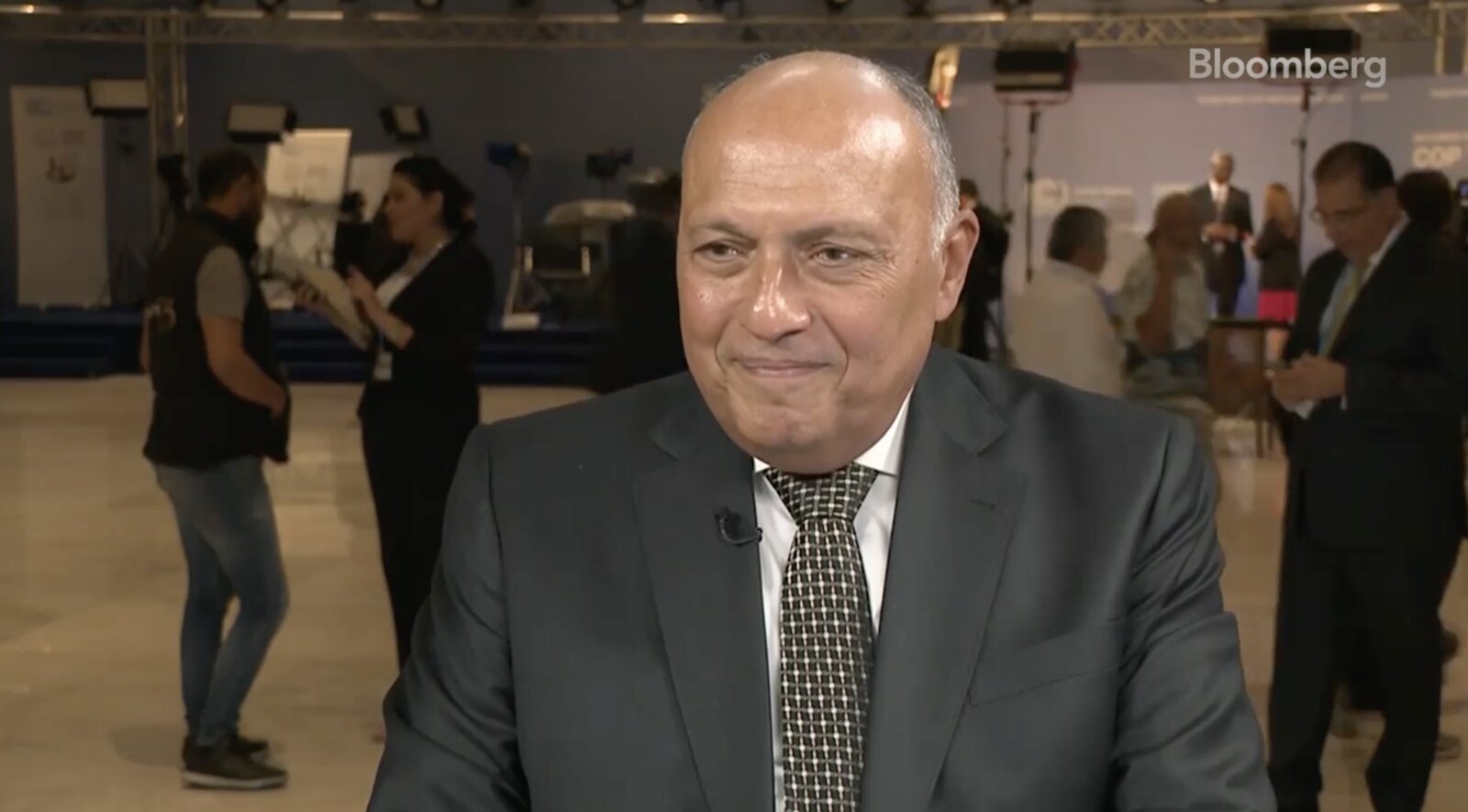 Will we see an agreement hammered out by Friday? COP27 President and Egyptian Foreign Minister Sameh Shoukry is “optimistic” that COP27 will yield an agreement on loss and damage, he told Bloomberg in an interview yesterday (watch, runtime: 11:07). Shoukry reiterated that loss and damage, how to plug climate finance gaps to keep the 1.5°C warming threshold within reach, and ensuring climate change action is “comprehensive and just” are all key to negotiations.

Climate finance is topping the COP27 negotiation agenda, with a target to address all the issues identified as important by the COP delegates — including mitigation, adaptation, finance, and loss and damage — in a way that’s equitable and “satisfies the interest of all parties, but also leads to greater ambition and climate action,” Shoukry told Bloomberg. That process could extend beyond Friday, he added.

Big polluters must play a major role in climate financing: The COP Presidency is “looking forward” to continued US contributions to help make up current shortfalls in the USD 100 bn previously pledged, along with other past commitments, Shoukry said, but stopped short of placing the same degree of responsibility on major emitters China and India.

IS A FOSSIL FUEL PHASE-OUT PLEDGE ON THE CARDS?

Negotiations on a proposal by India to “phase down” all fossil fuels are gaining momentum with backing from the EU, small island states, and the UK nearly locked in, Bloomberg reports, citing sources familiar with the matter. Some — including the UK and the EU — have reportedly been pushing for tougher “phase out” language to be included in the first draft of the COP27 Egyptian presidency’s cover decision which is expected this week, the sources said.

The caveat: Some Gulf and African countries, including Saudi Arabia and the UAE, are unlikely to be on board with a fossil fuel phase-out. Saudi Arabia’s Energy Minister Prince Abdulaziz bin Salman explicitly said in a Bloomberg interview last week that the world needs all kinds of energy and it is more about emissions mitigation, while UAE President Mohammed bin Zayed Al Nahyan defended the country’s plans to continue its role as oil supplier “as long as the world is in need of oil and gas.”

The good news? The world is on track to phase out coal: Over three quarters of coal-fired electricity generation capacity in the OECD and EU is on track to close by 2030, according to a report (pdf) by the Powering Past Coal Alliance. The scale of new coal power plants globally has also “collapsed by the same amount since 2015,” as rich countries stick to their pledges to phase out coal despite the energy crunch resulting from Russia’s war in Ukraine.

The bad news? China could “counteract” the gains: Despite China’s renewable energy ambitions, it has continued an expansion of coal power plants, the report says. Climate envoy Xei Zhenhua says pumping up coal-fired power capacity allows the country to maintain the stability of its power grid. China accounts for about two-thirds of the 300 GW of new coal power capacity planned globally, the report showed.

The EU has pledged to upgrade its emissions targets by at least 2% before next year’s COP28 as it looks to counter claims of backtracking on commitments due to the ongoing energy crisis, EU climate chief Frans Timmermans said during a speech at the summit. The bloc will not reverse course on its climate targets — which at 55% currently stands as one of the most ambitious targets among major emitters — Timmermans said.

Calls for “doubling” adaptation finance: “The EU is ready to make progress on the global goal on adaptation,” the climate chief said during his speech. He called on the summit’s attendees to “collectively double” adaptation finance, while pointing the finger at multilateral banks to get the ball rolling on “tns” to developing countries.

IN OTHER COP NEWS-

The European Investment Bank (EIB) will lend the UN’s International Fund for Agricultural Development (IFAD) EUR 500 mn to onlend to small-scale farmers, according to an EIB statement. The funds will help small-scale farmers with climate change adaptation and provide them with support to face global fuel and fertilizer crises that are compounding food shortages, the statement notes. EUR 150 mn will be immediately available, while the remaining EUR 350 mn is expected to be disbursed over the coming two years.

The World Bank is back in the hot seat: Climate-focused reform of the World Bank could and should be done within a year to end its “[tacit] support” of “fossil fuel colonialism,” former US Vice President and climate campaigner Al Gore told the Guardian in an interview at COP27. The World Bank and other multilateral development banks need to completely refocus on de-risking renewables projects in emerging markets and providing access to more private capital to help spur the energy transition, he added.

Egypt’s Electricity Minister Mohamed Shaker launched the Africa Just and Affordable Energy Transition Initiative (pdf) at COP27 yesterday, according to a cabinet statement. The initiative entails making the green transition of African countries financially viable, give 300 mn people access to clean cooking fuels and technologies, and upping the share of renewable energy by 25 percentage points by 2027, in order to build a power sector based on renewable energy sources by 2063.

UAE tech and telecom giant e& and Ericsson will work together to reduce energy usage and build more efficient networks, according to a press release. The three-year MoU will see e& focus on implementing energy saving strategies, network performance and e-waste recycling.